The second picture book from astronaut Scott Kelly follows his adventure-seeking travels through some of the wild places he's slept! Young readers will be delighted by the playful text and encouraging message to dream of the stars. As an astronaut, Scott Kelly is one of the few people who know what it's like to sleep in space. But that's not the only unusual place he's slept! As a child, he slept in treehouses, boats and tents, but his thrill-seeking nature has led to him snatching shuteye in every place imaginable. From the bottom of the ocean, to Mount Everest Base Camp, to the International Space Station, Scott will send readers to sleep dreaming of exploring the wildest places. This sweet and adventurous story is the perfect bedtime tale for future astronauts and adventurers! 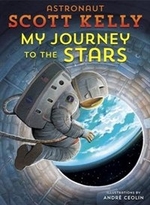 MY JOURNEY TO THE STARS
By: scott kelly | Published: October 2017

In this debut autobiographical picture book, celebrated astronaut Scott Kelly describes how he -- and his twin brother -- grew up to achieve his dream... [Read More]

In this debut autobiographical picture book, celebrated astronaut Scott Kelly describes how he -- and his twin brother -- grew up to achieve his dream of becoming an astronaut. As Scott Kelly prepares to blast back to Earth after a record-breaking year spent on the International Space Station, he thinks about what brought him here and what awaits him at home. Scott's partner-in-crime is his twin brother, Mark. They spent their childhood getting in and out of scrapes. They had a talent for finding trouble and taking risks, which turned out to be great training for the biggest risk of all -- space travel. Along the way to becoming astronauts, they learned to be peacemakers, to stay calm in the toughest of times, to support their family, to work hard and take small steps towards their goals. Scott learned that he needed people to believe in him, as his principal did, even though he was at first a terrible student who couldn't sit still. All of these skills served him well during his year on the ISS, where he and his crew ran 400 experiments and he himself became a test subject. The sacrifices Scott made, the dangers he faced and the sight of our beautiful planet from space made coming home even sweeter.