Norman Jespers-Vilnius is just an average eleven-year-old kid–until he absentmindedly nibbles on the edge of a page and wakes up inside his favo... [Read More]

Norman Jespers-Vilnius is just an average eleven-year-old kid–until he absentmindedly nibbles on the edge of a page and wakes up inside his favourite book, the Undergrowth Series. Norman finds himself smack in the middle of an epic battle of animal kingdoms, where he forms a close friendship with young Malcolm, a future king. After joining Malcolm’s fight he winds up back in his own bed, dirty and in torn pyjamas. But his adventures have only just started. It soon becomes clear that Norman has been caught by a mystifying force called “Bookweird”– Norman finds himself inside books his family is reading, mixing up plotlines. When he tries to undo an act of violence in his sister’s horse novel, he has to explain the appearance of a pony to some disgruntled policemen at a crime scene in his mother’s favourite thriller. Can Norman put all of the stories back on track and return these fictional worlds to normal? Or will Bookweird trap him in the pages forever? Award-winning author Paul Glennon has created a breathtaking, fast-paced story for adventurers of all ages. 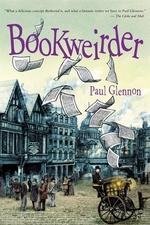 With its spirit of adventure, Bookweirder courts new readers and keeps Malcolm and Norman's devoted fans captivated. Norman Jespers-Vilnius is stuck in the sleepy British countryside with his parents and ultra-irritating sister. Things couldn't be duller — until Norman finds himself in the middle of the adventure story he discovered in the house's dusty library. Soon Norman is making strange new allies and stranger new enemies as struggles to rescue his best friend Malcolm the Prince of Stoats from another book gone wrong. Can Norman save Malcolm and steer the novel back on track? Can he hide his adventures in bookweird from his suspicious mother and the meddlesome Fuchs? Before we find out, we follow Norman on a chilling trip to 19th-century Paris, a fiery medieval adventure and, finally, a mission to discover the family secret at the heart of bookweird.