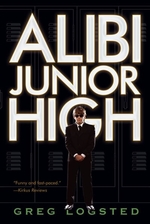 Now in paperback, the son of a secret agent takes on his hardest mission: junior high. Thirteen-year-old Cody Saron has been “home schooled&r... [Read More]

Now in paperback, the son of a secret agent takes on his hardest mission: junior high. Thirteen-year-old Cody Saron has been “home schooled” his whole life by his father, whom he believes is an undercover agent for the CIA. Cody never went to a regular school, never lived in one place longer than a few weeks, never had a friend or played on any sports teams.But he is a weapons and explosives expert. A black belt in the arts of Tae Kwon Do and Ju Jitsu. He speaks five languages and has traveled to every corner of the globe. What Cody isn't prepared for is . . . junior high. When the danger surrounding Cody's dad heats up, Cody is sent to stay with the aunt he's never known, Jenny Williams, in her small Connecticut suburb. Cody knows how to pick a lock or follow a trail, but he has no idea how to fit in with regular kids, how to handle his first crush, or how to make it through a day of classes. And when the threat follows Cody to Connecticut, he just might have to put all his skills to use!