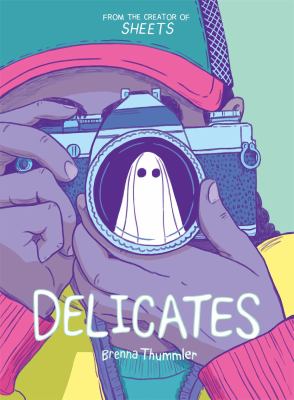 This list features graphic novels published within the last 3 years. If you would like other titles from previous years, please ask and we can customized a list just for you! Email [email protected] if you don’t find what you’re looking for.

The new graphic novel by the New York Times bestselling author, a heartbreaking and visceral examination of prejudice and the military remnants of col... [Read More]

The new graphic novel by the New York Times bestselling author, a heartbreaking and visceral examination of prejudice and the military remnants of colonialism set against the stark beauty of Afghanistan's mountain villages Lapis Lazuli is a rich blue semi-precious gemstone found deep within the Saresang Mountains of Afghanistan's Badakhshan province. For thousands of years, the people of Badakhshan have lived peacefully, seemingly untouched by time itself. However, in recent years, war has found its way into these remote villages, as the Taliban have sought the riches buried within the mountains of Badakhshan. This extremist group of Taliban fighters, known to the locals as the Horsemen, have recently taken control of the lucrative gemstone export market, focusing much of their energy on the sale of Lapis Lazuli. At the behest of the fledgling Afghan government, United States Marines are sent to this treacherous and remote region to combat the Taliban and restore the gemstone trade to the people of the mountains. Led by Sergeant King-a stoic and commanding presence whose contained exterior hides a violent shadow-the Marines find themselves in an epic clash of kings for control of the Badakhshan Mountains. Battle Born is about violence in all its forms--"civilized" and detached; close, brutal and extreme. But, most of all, it is also the story of human connection and human kindness. 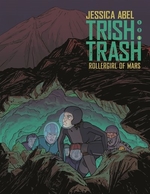 After meeting the indigenous Martian, Qiqi, Trish Nupindju's life changes forever. Qiqi has taught her to skate on terrain, helping her immensely on h... [Read More]

After meeting the indigenous Martian, Qiqi, Trish Nupindju's life changes forever. Qiqi has taught her to skate on terrain, helping her immensely on her hoverderby (a futuristic roller derby) team. She has also introduced a new way to harvest the moisture essential for life on Mars. But the suits at AREX are watching and they are not pleased. Trish's innovations could cause irreparable damage for everyone in her life-including her team and family!

Who is Cadaverous?! The most shocking and incredible comic of 2019 is here as J.J. Abrams (Star Wars, Star Trek, Super 8) and his son Henry Abrams are... [Read More]

Who is Cadaverous?! The most shocking and incredible comic of 2019 is here as J.J. Abrams (Star Wars, Star Trek, Super 8) and his son Henry Abrams are joined by superstar artist Sara Pichelli (MILES MORALES, GUARDIANS OF THE GALAXY) to team up for Spider-Man! What do they have planned for Peter Parker and Mary Jane Watson?! Who is Cadaverous?! The Modern Master of Mystery Makes His Marvel. COLLECTING: SPIDER-MAN (2019) 1-6 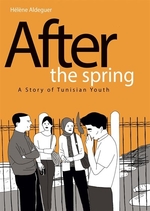 AFTER THE SPRING - TUNISIAN YOUTH
By: helene aldeguer | Published: October 2019

In 2011 one of the biggest political events in the world, the Arab Spring, swept across North Africa. But what came next? As the world moves on, four ... [Read More]

In 2011 one of the biggest political events in the world, the Arab Spring, swept across North Africa. But what came next? As the world moves on, four young Tunisians must cope with the reality of an uncertain future in this original graphic novel. Winner of the Raymond Leblanc Foundation's Belgian Prize, and translated into English for the first time, Helene Aldeguer delivers an authentic look at the disillusioned state of young people in Tunisia after the events of the Arab Spring illustrated in stark, beautiful black-and-white. Two years after the "Jasmine Revolution," Tunisia is unstable and facing economic hardship. Saif, Aziz, Meriem, and Chayma are among those who feel abandoned by the developing turmoil surrounding the government. Saif goes to college but worries about his younger brothers; Aziz struggles to find steady employment hoping to gain approval from Meriem's family, while Meriem attends law school; and Chayma, after watching a man set himself on fire, considers emigration to France. As the situation becomes more serious and calls to activism in the streets get louder, each must consider what direction their future lies. Helene Aldeguer spent time in Tunis in October, 2014 covering the parliamentary elections and living among the youth of the city and working alongside Tunisian journalists from Nawaat, an independent collective blog that provided a public platform for dissident voices and was blocked in Tunisia until 2011. Her work focuses on political and social issues related mainly to the Arab-Muslim world and includes the book Un Chant d'Amour: Israel-Palestine, une histoire francaise with writer Alain Gresh and illustrations for the website Orient XXI, which covers news events in countries from North Africa to the Middle East. She was selected for the Young Talent Contest at the Angoulême International Comics Festival in 2016 for her work, "2011-2016, Resume of a Revolution." 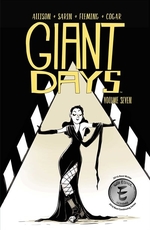 Esther, Susan, and Daisy continue to face the rigors of young adulthood in this Eisner-nominated series. Fast friends Susan, Daisy, and Esther continue their second year at Sheffield University, and these are formative times, indeed. Education and looking ahead to the future isn’t all that college holds in-store for these ladies; grocery store protests, family reunions, and even an MMORPG wedding are all on this semester’s docket.   John Allison (Bad Machinery, Scary Go Round) and illustrators Max Sarin and Liz Fleming, take us to Sophomore year’s second semester in Giant Days Volume 7, which collects Issues #25-28 of the Eisner Nominated series. 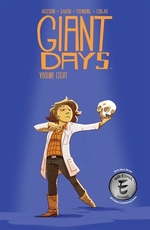 Best friends Susan, Daisy, and Esther's adventures at university continue in Giant Days Vol. 8. It’s the end of second year for best mates Susan, Daisy, and Esther, and cracks are appearing in the foundation of this unshakeable trio. Between (irritating) new loves, (secretive) old loves, (unlikely) new friendships and (terrible) old houses, they’ll be lucky to make it to third year alive! John Allison (Bad Machinery, Scary Go Round) and illustrators Max Sarin and Liz Fleming shepherd us through another action-packed semester in Giant Days Volume 8, which collects Issues #29-32 of the Eisner Award-nominated series. 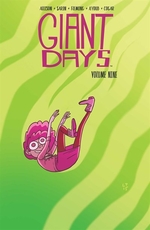 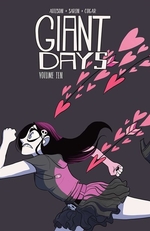 Daisy, Esther, and Susan’s last year at university is getting a bumpy start, with everything strange after Ed’s declaration of love follow... [Read More]

Daisy, Esther, and Susan’s last year at university is getting a bumpy start, with everything strange after Ed’s declaration of love followed by grievous injury, Daisy with nowhere to live, and McGraw and Susan at odds over their new flat! The final year of university is about to start for best mates Daisy, Esther, and Susan, and everything is going completely off the rails. From finding somewhere to live at the last minute, to broken bones, to the looming terror of the adult world, this semester is one you won’t want to miss. John Allison (Bad Machinery, Scary Go Round) and illustrators Max Sarin and Julia Madrigal are our “resident advisors” for this action-packed fall term, which collects Issues #37-40 of the Eisner Award-nominated series. 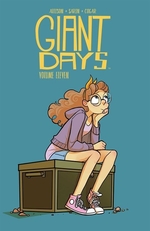 It’s Daisy, Esther and Susan’s third year at university, and with that comes new beaus, new jobs, and new adventures. The end of univer... [Read More]

It’s Daisy, Esther and Susan’s third year at university, and with that comes new beaus, new jobs, and new adventures. The end of university is upon BFFs Daisy, Esther, and Susan! Between Halloween run-ins with Daisy’s dreaded (dreadful) ex, part time gigs at a shady pop-up Christmas market, Esther dating a tech-bro, and Susan attempting to be…romantic, there’s still plenty to learn and more than enough misadventure to squeeze in before it’s time to don caps and gowns! Written by John Allison (Scary Go Round, By Night) and illustrated by the incredible Max Sarin, Giant Days volume 11 kicks off third year with a bang, collecting issues #41-44 of the Eisner-Nominated series. 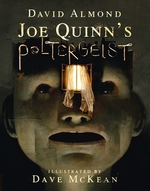 There’s a poltergeist in Joe Quinn’s house, and Davie is determined to discover its source in this lively, hopeful graphic storybook from ... [Read More]

There’s a poltergeist in Joe Quinn’s house, and Davie is determined to discover its source in this lively, hopeful graphic storybook from David Almond and Dave McKean. Joe Quinn has been telling everyone about the poltergeist in his house, but no one believes him. No one, that is, except Davie. Davie’s felt the inexplicable presence in the Quinns’ house and seen random objects fly through the air. And there’s something else . . . a memory of Davie’s beloved sister and a feeling deep down that it might just be possible for ghosts to exist. Full of thoughts of hauntings and grief and God, Davie hovers on a precipice of uncertainty and possibility, a space that storyteller David Almond occupies comfortably and returns to again and again — here paired once more with the dynamic, dreamlike mixed-media art of Dave McKean. 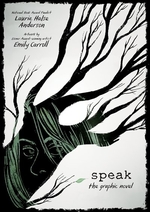 The critically acclaimed, award-winning, modern classic Speak is now a stunning graphic novel. "Speak up for yourself-we want to know what you have to say." From the first moment of her freshman year at Merryweather High, Melinda knows this is a big fat lie, part of the nonsense of high school. She is friendless-an outcast-because she busted an end-of-summer party by calling the cops, so now nobody will talk to her, let alone listen to her. Through her work on an art project, she is finally able to face what really happened that night: She was raped by an upperclassman, a guy who still attends Merryweather and is still a threat to her. With powerful illustrations by Emily Carroll, Laurie Halse Anderson's Speak: The Graphic Novel comes alive for new audiences and fans of the classic novel. This title has Common Core connections. 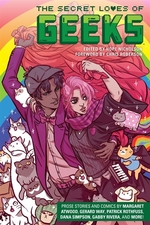 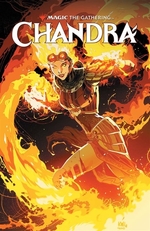 The rich world of Magic: The Gathering comes to life, revealing new adventures, in this thrilling graphic novel featuring Planeswalker and pyromancer Chandra Nalaar. In the wake of tragedy, Chandra strikes out on her own, determined to protect the Multiverse, no matter the cost to herself. Along the way she'll not only have to fight new threats, but also her own sense of guilt. Fellow Planeswalker and friend Ajani Goldmane tries to intervene, but it's ultimately on Chandra to save herself, especially when a sinister foe emerges from the shadows. Magic: The Gathering: Chandra ties directly into recent events on the cityscape plane of Ravnica--as seen in War of the Spark and subsequent card sets--bringing the comics closer to the game's story than ever before.

SHIVA - THE LEGEND OF RUDRA
By: ashok banker | Published: March 2021 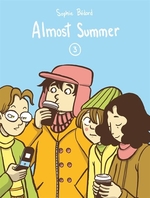 The whole Almost Summer gang is back to take on the biggest challenge it has ever faced : the final year of high school. The third chapter in this fou... [Read More]

The whole Almost Summer gang is back to take on the biggest challenge it has ever faced : the final year of high school. The third chapter in this four parts series features such dramatic events as Matthew refusing to take off his hat for the graduation picture, washing his hair for the first time in forever and finally asking Naomi out! Otherwise, it's business as usual for Emily, Anthony and Michelle - which means they are bored, don't really know what they want out of life and don't really care either. They're still typical teenagers and nothing, not even the fact that their lives are about to change forever, is ever going to change that.