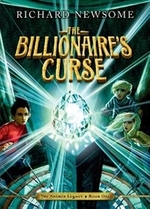 Young Gerald Wilkins' life is in danger. The world's mostvaluable diamond has been stolen and a guard lies unconsciousin the British Museum, two sedat... [Read More]

Young Gerald Wilkins' life is in danger. The world's mostvaluable diamond has been stolen and a guard lies unconsciousin the British Museum, two sedative darts protrudingfrom his backside -- not something Gerald Wilkins knows orcares anything about. Not until he finds himself on a privateluxury jet heading to London for the funeral of a great aunt hehas never met. Not until he inherits her estate, worth twentybillion pounds. Not until he opens a bundle of envelopes sheleft behind. Was she murdered? Who stole the diamond? And what isthe mysterious artifact that everyone seems to be searching for? With the help of the Valentine twins -- the rat-fearing Samand the gymnastic champ Ruby -- Gerald's got a mystery tosolve. A mystery that will take him into secret passageways, amusty jumbled bookshop, an ancient crypt, the tower of a ruinedchurch and a colossal cavern where the secret of a pricelesstreasure lies protected by deadly booby traps. The Billionaire's Curse is an irresistible action story withan array of curious characters, some ancient folklore and anengrossing whodunit guaranteed to keep young and not-so-youngup late turning the pages. 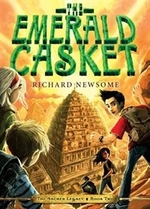 The Billionaire's Curse ended with the priceless Noor Jehan diamond safely returned to Mr. Gupta, but the villain Sir Mason Green is still at large, a... [Read More]

The Billionaire's Curse ended with the priceless Noor Jehan diamond safely returned to Mr. Gupta, but the villain Sir Mason Green is still at large, and a question mark hangs over the fate of his thin, murderous henchman. It's been two weeks since the events in the English countryside. Two weeks since the diamond casket was opened. Two weeks since Mason Green disappeared with an object that Gerald's family had been keeping secret for centuries. And while everyone knows that Green will resurface again, no one knows what his next move will be. No one . . . except Gerald. Breaking into Green's room at the Rattigan club, Gerald, Ruby and Sam discover that the diamond casket was actually one of three ancient boxes containing objects of great power. After our heroes accept an invitation from Mr. Gupta to visit India, they discover that it may be the resting place of the emerald casket. But India holds more than just the casket: it also has assassins bent on stopping them at all costs, a great city under the sea, and Alisha Gupta, who Ruby can't stand and Gerald and Sam can't see enough of. Richard Newsome has crafted a sequel that more than delivers on the promise of the first book and sets readers up for a breathtaking conclusion. 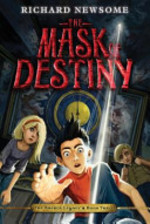 More money, more mystery and more murder. Will Gerald ever be able to enjoy his billions? The police have finally caught the evil murderer Sir Mason G... [Read More]

More money, more mystery and more murder. Will Gerald ever be able to enjoy his billions? The police have finally caught the evil murderer Sir Mason Green. The third casket and whatever treasure it contains can remain a secret, just as the Fraternity wished, and Gerald can relax and enjoy his billions. Or can he? At his trial, Green drops dead in the dock. Forensic testing shows-that he was poisoned by a dart, and Gerald’s DNA is on the blowgun. Then a mysterious cat woman steals the key to the third casket—a mysterious woman with a store of poison darts, who happens to be Sir Mason Green’s niece, Charlotte. Now Gerald is on the run with Ruby and Sam, wanted for murder. Can they beat Charlotte to the ruby casket and prove that she killed Green? Their quest takes them to caverns beneath the island castle of Mont St. Michel in France, locked rooms in the Vatican and the ancient hidden city of Delphi in Greece to discover the secret of the three caskets and the great power they hold.