Below is a list of 63 the books by this author.

Stink's spider phobia spurs his sister, Judy, and friend Webster to try some desensitization techniques--until a real-life encounter takes them by surprise--in a hilarious episode offering a bonus origami activity. Creepy! Crawly! Criminy! Everyone knows that Stink is bonkers about most scientific things. But there's one exception: dangle a spider in front of him and he goes berserk! Stink is so freaked out by spiders that he can't read about them. He can't look at them. He can't think about them. And he for-sure can't touch them! Stink has arachnophobia (a fear of spiders), and he has it bad. But when a hairy backyard emergency arises, Stink is forced to face his fear--and eight beady eyes--head-on. Will he manage to tame the heebie-jeebies, or will he remain stuck in his web of terror? Arachno-fans will love the comics sprinkled throughout with facts about spiders as well as a hands-on origami challenge. 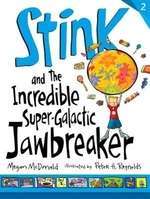 Spurred by a newfound awareness of false advertising, Stink Moody becomes the proverbial kid in a candy store as his letter-writing campaign yields hi... [Read More]

Spurred by a newfound awareness of false advertising, Stink Moody becomes the proverbial kid in a candy store as his letter-writing campaign yields him heaps of free rewards. When Stink buys a mammoth jawbreaker that doesn't break his jaw, he writes a letter of complaint to the manufacturer — and receives a ten-pound box of 21,280 jawbreakers for his trouble! This unexpected benefit of acing the art of letter-writing in school sure gets Stink thinking. Soon Stink is so preoccupied with getting free stuff sent to him that he overlooks a scribbly envelope in the mail pile — until his best friend, Webster, starts acting standoffish and looks as mad as a hornet. In this hilarious episode from Megan McDonald and Peter H. Reynolds, Judy Moody's shorter sibling truly comes into his own. As a delightful bonus for both teachers and kids, thirty-six common idioms — from "two heads are better than one" to "a leopard can’t change its spots" — are sprinkled throughout the story; seven of the idioms are humorously illustrated by Stink, and all are listed at the end to inspire a search for idioms that’s more fun than a barrel of monkeys. 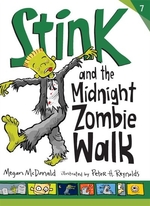 “The farce is as broad as the Atlantic, with enough spookiness just below the surface to provide the all-important shivers.” — Kirk... [Read More]

“The farce is as broad as the Atlantic, with enough spookiness just below the surface to provide the all-important shivers.” — Kirkus Reviews Guts! Brains! Eyeballs! There's only one week before the new book in the Nightmare on Zombie Street series comes out. Of corpse Stink will be first in line at the Blue Frog Bookstore to buy his copy and join the town's Midnight Zombie Walk! Until then, Stink and his friends keep busy making ketchup-stained zombie costumes, trying to raise money to buy the book, and racking up points for Virginia Dare School's race to one million minutes of reading. But with all that talk about the undead, Zink — that is, Stink — starts to wonder: is he being hunted by zombies? He does have a very delicious — er, superb — brain, after all. Readers will just have to open ze book and zee! Mwa-ha-ha-ha!

Shark-tastic! Stink gets to sleep with the fishes after his parents win an aquarium sleepover. But wait — what’s that lurking beyond the K... [Read More]

Shark-tastic! Stink gets to sleep with the fishes after his parents win an aquarium sleepover. But wait — what’s that lurking beyond the KEEP OUT sign? When Stink’s parents win tickets for the whole family to sleep over at the aquarium (along with Stink’s two best friends), it sounds like a science freak’s dream come true. Stink loves the sea-creature scavenger hunt (Bat ray! Brain coral!), the jellyfish light show, and the shiver of sand tiger sharks with razor-sharp teeth. And of course Stink is nuts about gross stuff, but after some spooky stories around the virtual campfire, can he manage to fall asleep thinking about the eating habits of the vampire squid? Especially Bloody Mary, the mutant, glowing Frankensquid that’s supposed to be on the prowl? 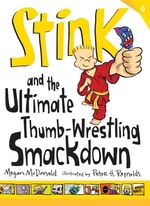 Stink needs a sport, fast! Can his alter-ego, Shark Hammersmash, wrestle a win at thumb wars? Or will a perfect karate kick lead him to victory? St... [Read More]

Stink needs a sport, fast! Can his alter-ego, Shark Hammersmash, wrestle a win at thumb wars? Or will a perfect karate kick lead him to victory? Stink Moody, family brain, brings home a report card that isn’t perfect? Yikes! Time for him to get into fighting shape and beat back that U for Unsatisfactory in gym! A scan of the sports channel leads to a knock-out find: world-class thumb wrestling, with tricky moves like Snake in the Grass and Santa’s Little Helper (no equipment needed, save for a tiny terrifying mask to sit on your thumb). But when Mom and Dad are not wowed, Stink gets another idea: he’ll kick and punch his way to a yellow belt with the help of a Dragon Master, a seeing-eye Moose, and a mind as still as a pond. Can you say Crouching Tiger, Hidden Thumb? Hee-ya! Ha! Ha! Ha! 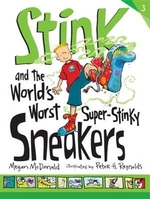 Follow your nose to a hilarious Stink-fest no kid will want to miss! GROSS ME OUT! STINK-O! SKUNKSVILLE! Stink Moody’s class is going on a... [Read More]

Follow your nose to a hilarious Stink-fest no kid will want to miss! GROSS ME OUT! STINK-O! SKUNKSVILLE! Stink Moody’s class is going on a field trip to the Gross-Me-Out exhibit at the science museum, and he can’t wait to see the Vomit Machine, the Burp-O-Meter, and the Musical Farts. Best of all, when he gets to the Everybody Stinks exhibit, Stink discovers that his very own nose has amazing sniffing abilities — and he learns that some people have real jobs sniffing stuff for NASA! Soon the junior olfactory wiz is engrossed in toilet water, corpse flowers, and all things smelly, and he and Sophie of the Elves are set to go toe-to-toe in a stinky sneaker contest. Will Stink’s fetid footwear be foul enough to earn him a Golden Clothespin Award? Stink’s loyal fans will be holding their breath this outrageous solo adventure. 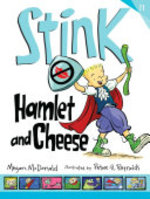 Hie thee to Shakespeare camp with Stink to learn fake sword-fighting, spout silly curses, and prithee try to escape a kiss . . . BLUCK! It's spring break, and Stink is faced with a difficult choice: hang out at home with his sister, Judy, or become a Shakespeare Sprite with his friend Sophie of the Elves. Hanged be! When Sophie tells Stink that there will be swordplay and cursing at Shakespeare camp, his choice is made. But wait! How now? The eager young thespian hadn't counted on Riley Rottenberger being a Sprite, too. And he positively had not counted on being the only boy! Fie upon't! 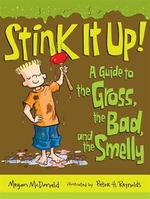 STINK IT UP
By: megan mcdonald | Published: August 2013

They don’t call him Stink for nothing! Now kids can savor a smorgasbord of facts about smelly and vile stuff in honor of their favorite super sn... [Read More]

They don’t call him Stink for nothing! Now kids can savor a smorgasbord of facts about smelly and vile stuff in honor of their favorite super sniffer. Did you know that a group of skunks is called a stench? (No lie!) Can you believe that in colonial days, window-washing rags were dipped in pee? Or that snail slime was once an ingredient in cough syrup? Stink has a nose for yuck and muck, and this book is full of it: moose poop festivals, mouse brain toothpaste, maggot cheese, and way more. Its pages are crawling with more than two hundred facts, quizzes, recipes, and bits of trivia about things that are gross, bad, and smelly. P.U.! 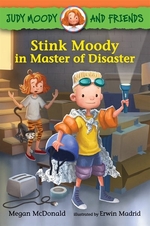 STINK MOODY IN THE MASTER OF DISASTER
By: megan mcdonald | Published: March 2015

Stink takes a star turn—and helps stave off cosmic calamity—in a Judy Moody & Friends adventure just right for newly independent readers. Look up! Look out! A comet is coming, a comet is coming! Stink is camped out in the backyard with his sister, Judy, and he can’t wait to lay eyes on P/2015 OZ4, also known as the Sherman-Holm Comet. But then news of an asteroid hitting Russia reaches Stink, and suddenly he’s feeling squeamish (and squash-ish) about close encounters of the outer-space kind. Will donning an aluminum-foil cape and building a bunker in the basement help keep him safe? Can this fearless Asteroid Boy save Earth from disaster? 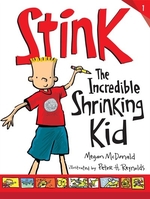 By popular demand — Judy Moody's brother, Stink, gets his chance to star! Shrink, shrank, shrunk! Every morning, Judy Moody measures Stink and it's always the same: three feet, eight inches tall. Stink feels like even the class newt is growing faster than he is. Then, one day, the ruler reads — can it be? — three feet, seven and three quarters inches! Is Stink shrinking? He tries everything to look like he’s growing, but wearing up-and-down stripes and spiking his hair aren't fooling anyone into thinking he's taller. If only he could ask James Madison — Stink's hero, and the shortest person ever to serve as president of the United States. In Stink's first solo adventure, his special style comes through loud and strong — enhanced by a series of comic strips, drawn by Stink himself, which are sprinkled throughout the book. From "The Adventures of Stink in SHRINK MONSTER" to "The Adventures of Stink in NEWT IN SHINING ARMOR," these very funny, homespun sagas reflect the familiar voice of a kid who pictures himself with super powers to deal with the travails of everyday life — including the occasional teasing of a bossy big sister! 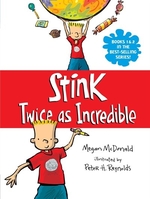 Kick-start a Stink collection with a way-cool bind-up of his first two adventures. Get two times the Stink in one book! Featuring: Stink: The In... [Read More]

Kick-start a Stink collection with a way-cool bind-up of his first two adventures. Get two times the Stink in one book! Featuring: Stink: The Incredible Shrinking Kid Shrink, shrank, shrunk! Every morning Judy measures Stink, and it’s always the same: three feet eight inches tall. Until, that is, the day the ruler reads a quarter-inch less. Can it be? Is Stink shrinking? Stink and the Incredible Super-Galactic Jawbreaker Spurred by a newfound awareness of false advertising, Stink Moody becomes the proverbial kid in a candy store as his letter-writing campaign yields him heaps of rewards. 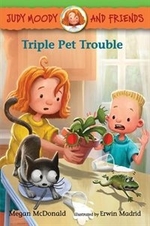 Judy’s unusual pets—Jaws, Mouse, and Toady—are the center of attention in a new Judy Moody® book for newly independent readers. Dr. Judy knows a sick pet when she sees one, and Jaws the Venus flytrap is for-sure sick. Time for some urgent care and first aid! Judy Moody, pet vet, will never rest in her efforts to nurse Jaws back to health. In her quest for a medical miracle, Judy finds herself wrangling an unruly toad and seeking help from Mouse, the mind-reading cat. Nothing will stand in the way of Judy’s search for a cure. Not even the fearsome Carnivoria vampira! From Megan McDonald comes this selection of three mini-stories just right for luring young readers into the Moody universe. 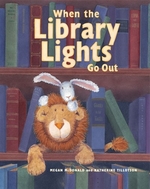 WHEN THE LIBRARY LIGHTS GO OUT
By: megan mcdonald | Published: May 2009

When the library lights go out, that means it’s time for three story-hour puppets to begin their adventures! At first only Rabbit and Lion come ... [Read More]