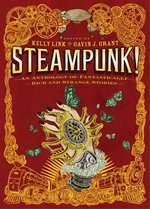 In the first major YA steampunk anthology, fourteen top storytellers push the genre's mix of sci-fi, fantasy, history, and adventure in fascinating new directions. Imagine an alternate universe where romance and technology reign. Where tinkerers and dreamers craft and re-craft a world of automatons, clockworks, calculating machines, and other marvels that never were. Where scientists and schoolgirls, fair folk and Romans, intergalactic bandits, utopian revolutionaries, and intrepid orphans solve crimes, escape from monstrous predicaments, consult oracles, and hover over volcanoes in steam-powered airships. Here, fourteen masters of speculative fiction, including two graphic storytellers, embrace the genre's established themes and refashion them in surprising ways and settings as diverse as Appalachia, ancient Rome, future Australia, and alternate California. Visionaries Kelly Link and Gavin J. Grant have invited all-new explorations and expansions, taking a genre already rich, strange, and inventive in the extreme and challenging contributors to remake it from the ground up. The result is an anthology that defies its genre even as it defines it.