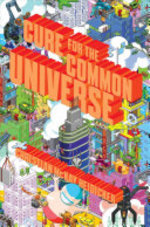 CURE FOR THE COMMON UNIVERSE
By: christian heidicker | Published: June 2017

Prepare to be cured by this quirky and hilarious debut novel about a sixteen-year-old loner who is sent to rehab for video game addiction—&ldquo... [Read More]

Prepare to be cured by this quirky and hilarious debut novel about a sixteen-year-old loner who is sent to rehab for video game addiction—“perfect for teen gamers and readers who are fans of Jesse Andrews and John Green” (School Library Journal). Sixteen-year-old Jaxon is being committed to video game rehab…ten minutes after meeting a girl. A living, breathing girl named Serena, who not only laughed at his jokes but actually kinda sorta seemed excited when she agreed to go out with him. Jaxon’s first date. Ever. In rehab, Jaxon can’t blast his way through galaxies to reach her. He can’t slash through armies to kiss her sweet lips. Instead, he has four days to earn one million points by learning real-life skills. And he’ll do whatever it takes—lie, cheat, steal, even learn how to cross-stitch—in order to make it to his date. If all else fails, Jaxon will have to bare his soul to the other teens in treatment, confront his mother’s absence, and maybe admit that it’s more than video games that stand in the way of a real connection. From a bright new voice in young adult literature comes the story of a young man with a serious case of arrested development—and carpal tunnel syndrome—who is about to discover what real life is all about.