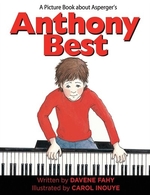 Anthony Best is not like the other kids in his neighborhood. He screams at loud noises, doesn’t like to be called “Tony,” spins... [Read More]

Anthony Best is not like the other kids in his neighborhood. He screams at loud noises, doesn’t like to be called “Tony,” spins around in circles to have fun, and throws sand at kids in the sandbox. Other kids laugh at silly knock-knock jokes, but not Anthony; he simply stands and stares. And instead of giggling, he flaps his hands when he is happy. Anthony has Asperger’s syndrome, which makes him see the world in a different way. But his friend Hannah knows that although Anthony is different and doesn’t play like other kids, he has something very special inside—something that makes him “the best.” When Anthony receives a new piano, his hidden talent is revealed. Everyone has their quirks and traits that make them different from others, as Davene Fahy and Carol Inouye illustrate, but those differences are precisely what make us special—no matter how we interact with others. With around 1.5 percent of children in the United States diagnosed with Asperger’s syndrome, Anthony Best is a useful tool for teachers, speech therapists, and parents to use in discussions with children about communication problems, accepting differences, teaching tolerance, and discovering what makes each one of us special.