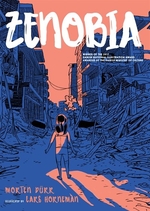 A deeply moving and award-winning graphic novel about a young Syrian refugee. Zenobia was once a great warrior queen of Syria whose reign reached f... [Read More]

A deeply moving and award-winning graphic novel about a young Syrian refugee. Zenobia was once a great warrior queen of Syria whose reign reached from Egypt to Turkey. She was courageous. No one gave her orders. Once she even went to war against the emperor of Rome.      When things feel overwhelming for Amina, her mother reminds her to think of Zenobia and be strong. Amina is a Syrian girl caught up in a war that reaches her village. To escape the war she boards a small boat crammed with other refugees. The boat is rickety and the turbulent seas send Amina overboard. In the dark water Amina remembers playing hide and seek with her mother and making dolmas (stuffed grape leaves) and the journey she had to undertake with her uncle to escape. And she thinks of the brave warrior Zenobia. Zenobia is a heartbreaking and all-too-real story of one child's experience of war. Told with great sensitivity in few words and almost exclusively with pictures, Zenobia is a story for children and adults.