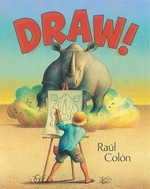 Based on his own childhood, beloved and award-winning artist Raúl Colón’s wordless book is about the limitless nature of creativit... [Read More]

Based on his own childhood, beloved and award-winning artist Raúl Colón’s wordless book is about the limitless nature of creativity and imagination. A boy alone in his room. Pencils. Sketchbook in hand. What would it be like to go on safari? Imagine. Draw… A boy named Leonardo begins to imagine and then to draw a world afar—first a rhinoceros, and then he meets some monkeys, and he always has a friendly elephant at his side. Soon he finds himself in the jungle and carried away by the sheer power of his imagination, seeing the world through his own eyes and making friends along the way. 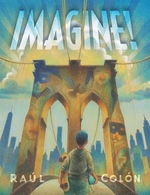 An ALA Notable Book A New York Public Library Best Book for Kids A Bookpage Best Book “This fine book provides not only exposure to art&... [Read More]

An ALA Notable Book A New York Public Library Best Book for Kids A Bookpage Best Book “This fine book provides not only exposure to art…but also an example of a boy—a boy of color, a boy in America—with a passion for fine art.” —The New York Times “The prosaic world of the city boy we meet…is transformed into a realm of wonder not by a quirk of quantum physics but by exposure to fine art.” —The Wall Street Journal “A joyful, wordless exploration of artistic discovery.” —Shelf Awareness (starred review) “Colon’s latest again challenges readers to discover inspiration through ingenious means…beautifully euphoric.” —Kirkus Reviews (starred review) “Captures the drama of a personal artistic experience and the lasting impact it can have…compelling…an irresistible invitation to creativity.” —School Library Journal (starred review) “A delightful wordless tribute to the arts with a magical touch.” —Booklist (starred review) “Colón’s vibrant scenes make it clear that visiting works of art can breathe magic into the everyday and inspire further creativity afterward.” —Publishers Weekly (starred review) Six starred reviews for New York Times bestselling artist Raúl Colón’s wordless picture book about a visit to the museum and the power of art and imagination, which “hums with and jubilation” (The Horn Book, starred review). After passing a city museum many times, a boy finally decides to go in. He passes wall after wall of artwork until he sees a painting that makes him stop and ponder. Before long the painting comes to life and an afternoon of adventure and discovery unfolds, changing how he sees the world ever after.