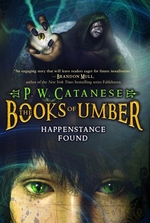 Master storyteller P.W. Catanese begins the Books of Umber trilogy with Happenstance Found—now available in paperback—when twelve-yearold Happenstance awakens in a cave with no memory of who he is or how he came to be there. Lord Umber and his companions rescue Hap, and the group sets out on dangerous and unusual missions that continue in Dragon Games. Hap’s and Umber’s journeys take them to the corrupt kingdom of Sarnica, where Umber’s nemesis has acquired some dragon eggs. Umber wants to study a new magical species, but what starts as a quest for knowledge turns into a dangerous rescue operation. The deft plotting of these actionpacked, heart-stopping adventures will pique the imagination and leave readers anxious for the final installment. 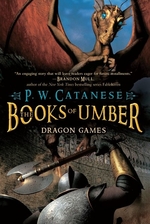 A surprise visitor to the Aerie provides devastating news for Happenstance about his past--but it's the future that Umber and Hap must contend with: t... [Read More]

A surprise visitor to the Aerie provides devastating news for Happenstance about his past--but it's the future that Umber and Hap must contend with: they need to learn all they can about Meddlers if they are to discover what Hap's role in Umber's mission is to be. And that means a risky trip to The Inferno, where Caspar has taken the key pages of Umber's research. But that's only one of the perilous journeys Umber has in mind for his mysterious ward: Umber's nemesis, the wheeling and dealing Hameron, has acquired some dragon eggs, and Umber can't resist the opportunity to study a new magical species, even if it means a trip to the corrupt kingdom of Sarnica. But when he and Hap see what the warlord of Sarnica has planned for the dragon hatchlings at the upcoming Dragon Games, Umber's quest for knowledge turns into a dangerous rescue operation. 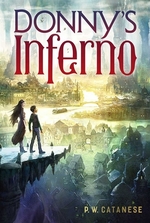 From award-winning author P.W. Catanese comes a fascinating novel about a twelve-year-old boy who must prevent the new kinder, gentler underworld from... [Read More]

From award-winning author P.W. Catanese comes a fascinating novel about a twelve-year-old boy who must prevent the new kinder, gentler underworld from returning to its previous terrifying incarnation. Twelve-year-old Donny Taylor was rescued from certain death in a burning building. His savior, a mysterious girl named Angela Obscura, seems to be able to walk right out of the flames. Although she appears to be a teenager, Angela is actually an ancient dignitary from the underworld who needs the help of a mortal. And she’s chosen Donny. Hades, a bizarre, cavernous world that was once filled with pitchforks, fiery pits, and tortured souls, has recently become a kinder, gentler place where people can contemplate their transgressions rather than face eternal punishment. Now known as Sulfur, the underworld went through a period of reformation punctuated by a violent revolution that left the vicious old guard, the Merciless, defeated and imprisoned. But it soon becomes apparent that the Merciless are plotting a comeback. If they succeed, they will reignite the long-extinguished Pits of Fire with a billion souls inside. And reformers like Angela and Donny will face Annihilation: the utter destruction of the consciousness and the soul, a nothingness more final than death itself. With everything on the line and billions of souls to protect, Donny—a mortal and outsider—becomes the key to the underworld’s salvation and the only one who can save Sulfur. 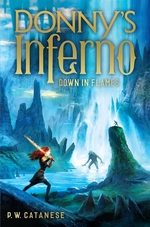 DOWN IN FLAMES
By: pw catanese | Published: April 2018

From award-winning author P.W. Catanese comes the second fast-paced thriller about a twelve-year-old boy who must protect the kinder, gentler underwor... [Read More]

From award-winning author P.W. Catanese comes the second fast-paced thriller about a twelve-year-old boy who must protect the kinder, gentler underworld from returning to its previous terrifying incarnation. After being rescued from a fiery death by Angela Obscura, an ancient demon from the underworld, Donny Taylor is settling into a new home in Sulfur. Life as Angela’s mortal assistant isn’t so bad. Donny gets to travel to exotic places through fire portals, money is no object, and he’s seeing amazing things that few mortal boys have ever laid eyes on. Plus Angela is fun to be around. What’s not to like? Well there is one minor detail. Being Angela’s assistant has almost gotten Donny killed a couple of times. And Angela doesn’t seem to take his worries very seriously. After all, she may look like a beautiful human, but she’s a demon and hard to kill. Donny, however, is all too vulnerable. When another encounter with a horrific underworld monster nearly gets him devoured, he’s starting to wonder if he should find a way out of the whole situation. Then the king of the underworld’s ferrymen gives Angela and Donny a mission. Souls are disappearing before they reach Sulfur. But who’s taking them, and why? Their quest takes the pair on another globe-hopping adventure, where they join forces with a charming old friend of Angela’s named Fiasco. When Donny finds himself in danger yet again, it’s finally time to decide: Should he help Angela pursue this mystery to its shocking conclusion? Or should he plan his escape to a normal mortal life, before it all goes down in flames?