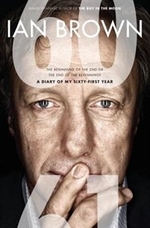 Shortlisted for the Hilary Weston Writers' Trust Prize for Non-Fiction as well as a finalist for the RBC Taylor Prize, Sixty is a wickedly honest and ... [Read More]

Shortlisted for the Hilary Weston Writers' Trust Prize for Non-Fiction as well as a finalist for the RBC Taylor Prize, Sixty is a wickedly honest and brutally funny account of the year in which Ian Brown truly realized that the man in the mirror was...sixty. By the author of the multiple award-winning The Boy in the Moon.      Sixty is a report from the front, a dispatch from the Maginot Line that divides the middle-aged from the soon to be elderly. As Ian writes, "It is the age when the body begins to dominate the mind, or vice versa, when time begins to disappear and loom, but never in a good way, when you have no choice but to admit that people have stopped looking your way, and that in fact they stopped twenty years ago."      Ian began keeping a diary with a Facebook post on the morning of February 4, 2014, his sixtieth birthday. As well as keeping a running tally on how he survived the year, Ian explored what being sixty means physically, psychologically and intellectually. "What pleasures are gone forever? Which ones, if any, are left? What did Beethoven, or Schubert, or Jagger, or Henry Moore, or Lucien Freud do after they turned sixty?" And most importantly, "How much life can you live in the fourth quarter, not knowing when the game might end?"      With formidable candour, he tries to answer this question: "Does aging and elderliness deserve to be dreaded--and how much of that dread can be held at bay by a reasonable human being?" For that matter, for a man of sixty, what even constitutes reasonableness?

Ian Brown's son, Walker, was born with a genetic mutation so rare that doctors call it an orphan syndrome: perhaps 300 people around the world live wi... [Read More]

Ian Brown's son, Walker, was born with a genetic mutation so rare that doctors call it an orphan syndrome: perhaps 300 people around the world live with it. At thirteen, Walker is still in diapers, he can't speak and he has to wear cuffs on both his arms so that he won't constantly hurt himself. In a tender, haunting book that owes its beginnings to a Globe and Mail series, Brown explores the joy and turmoil surrounding his son's life. As he writes: 'sometimes watching Walker is like looking at the moon: you see the face of the man in the moon, yet you know there's actually no man there. But if Walker is so insubstantial, why does he feel so important? What is he trying to show me?' Written with humour and stark honesty, The Boy in the Moon is infused with a father's love for his son and with every parent's longing to be worthy of his children.