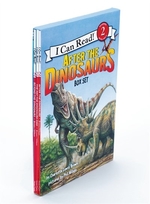 AFTER THE DINOSAURS BOX SET
By: charlotte brown | Published: June 2015

Beyond dinosaurs, what strange and powerful creatures lived millions of years ago? This three-book collection introduces beginning readers to the amaz... [Read More]

Beyond dinosaurs, what strange and powerful creatures lived millions of years ago? This three-book collection introduces beginning readers to the amazing creatures that lived alongside the dinosaurs, the giant asteroid that may have killed them, and the incredible mammals that ruled the earth after the dinosaurs died. Written by paleontologist Charlotte Lewis Brown and with exciting, vivid illustrations from Phil Wilson, this Level Two I Can Read slipcase is geared for kids who read on their own but still need a little help. This slipcase includes the following I Can Read titles: After the Dinosaurs Beyond the Dinosaurs The Day the Dinosaurs Died Correlates to the Common Core State Standards in English Language Arts