2011 Governor General's Literary Awards Finalist - Fiction Shortlisted for the 2011 Scotiabank Giller Prize It is August 1978. Brezhnev sits like a stone in the Kremlin and nuclear missiles stand primed in the Siberian silos. The Iron Curtain divides East from West as three generations of the Krasnansky family leave the Soviet Union to get their first taste of freedom. Choosing Canada rather than Israel as their destination, the Krasnanskys find themselves on an enforced holiday in Italy with thousands of other Russian Jewish immigrants all facing an uncertain future. Together the irresistible and quarrelsome Krasnanskys will spend six months in Rome, where they will immerse themselves in the carnival of emigration, in an Italy rife with love affairs and ruthless hustles, with the promise and peril of a new life. Writing in precise, musical prose, David Bezmozgis has created an intimate portrait of a tumultuous era, confirming his reputation as one of our most mature and accomplished storytellers.

David Bezmozgis, the writer who brought us the “pointed, emotionally resonant tales” (The Globe and Mail) of Natasha and Other Stories, br... [Read More]

David Bezmozgis, the writer who brought us the “pointed, emotionally resonant tales” (The Globe and Mail) of Natasha and Other Stories, brings us a new collection, his first in more than a decade. In the title story, a father and his young daughter stumble into a bizarre version of his immigrant childhood. A mysterious tech conference brings a writer to Montreal where he discovers new designs on the past in “How it Used to Be.” A grandfather’s Yiddish letters expose a love affair and a wartime secret in “Little Rooster.” In “Roman’s Song,” Roman’s desire to help a new immigrant brings him into contact with a sordid underworld. At his father’s request, Victor returns to Riga, the city of his birth, and has his loyalties tested by the man he might have been in “A New Gravestone for an Old Grave.” And, in the noir-inspired “The Russian Riviera,” Kostya leaves Russia to pursue a boxing career only to find himself working as a doorman in a garish nightclub in the Toronto suburbs. In these deeply-felt, slyly humorous stories, Bezmozgis pleads no special causes but presents immigrant characters with all their contradictions and complexities, their earnest and divided hearts. 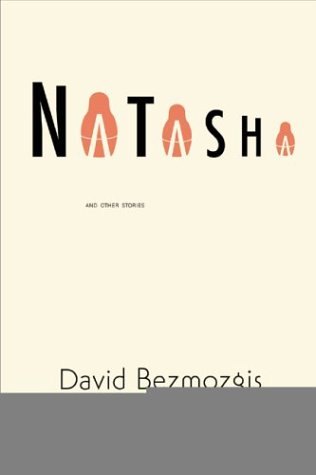 NATASHA
By: david bezmozgis | Published: May 2004

147 pages of excellent text. Stated First Edition. "About this title" may belong to another edition of this title.

One of the most anticipated international debuts of 2004, David Bezmozgis’s Natasha and Other Stories lives up to its buzz withnumerous award di... [Read More]

One of the most anticipated international debuts of 2004, David Bezmozgis’s Natasha and Other Stories lives up to its buzz withnumerous award distinctions and a sheaf of praise from reviewers and readers.These are stories that capture the immigrant experience with wit and deepsympathy, recalling the early work of Bernard Malamud and Philip Roth. Anexquisitely crafted collection from a gifted young writer.