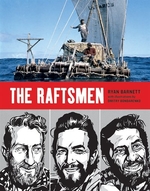 A dramatic and thrilling portrait of a long-forgotten true adventure and astounding seafaring achievement. In The Raftsmen, author and documentary ... [Read More]

A dramatic and thrilling portrait of a long-forgotten true adventure and astounding seafaring achievement. In The Raftsmen, author and documentary filmmaker Ryan Barnett takes readers on an astonishing maritime adventure set in the aftermath of World War II. For four French expatriates who escaped the clutches of the Nazi regime to find asylum in Canada, adventure was to be the antidote to depression brought on by the cruelty of war. In 1956, armed with nothing but the flannel on their backs, a small stock of food, and some crude navigation and communication equipment, the quartet set sail from Halifax. Their goal: to become the first crew to cross the Atlantic by raft. Fashioned from telephone poles and built entirely by hand, the raft they called L'Egare II would be their home for 88 harrowing days as they crossed the North Atlantic from Canada to Britain. And they made it! In The Raftsmen, Barnett and comic illustrator Dmitry Bondarenko explore the adventure-fueled men aboard the L'Egare II, and the complex emotional undercurrents that led to their daredevil voyage. Original archival photography and film stills taken by the crew aboard the raft, along with news reports and contemporary interviews with still-living members and other key players, round out the re-telling of this amazing journey. Sixty years after they set sail, the epic story of the raftsmen's historic Atlantic crossing is brought to life for the first time.