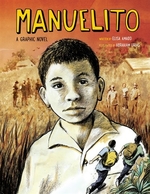 The powerful story of a child refugee seeking asylum in America   Thirteen-year-old Manuelito is a gentle boy who lives with his family in a tiny v... [Read More]

The powerful story of a child refugee seeking asylum in America   Thirteen-year-old Manuelito is a gentle boy who lives with his family in a tiny village in the Guatemalan countryside. But life is far from idyllic: PACs—armed civil patrol—are a constant presence in the streets, and terrifying memories of the country’s war linger in the villagers’ collective conscience. Things deteriorate further when government-backed drug gangs arrive and take control of the village. Fearing their son will be forced to join a gang, Manuelito’s parents make the desperate decision to send him to live with his aunt in the United States.   With just a bus ticket and a small amount of cash in hand, Manuelito begins his hazardous journey to Mexico, then the U.S., in search of asylum. But in the end, dangers such as the crooked “coyote”—or human smuggler—his parents have entrusted their son’s life to may be nothing compared to the risks Manuelito faces when he finally reaches the United States.   Manuelito’s titular character is just one of the staggering two hundred thousand children from the Northern Triangle of Central America—Guatemala, El Salvador, and Honduras—who have made this perilous journey to escape their war-torn countries. Many are now detained in Mexico, separated from their parents and without access to lawyers, facing the unthinkable prospect of being sent back to the homes and danger they risked so much to escape.   Drawing on years of experience working with child refugees like Manuelito, Elisa Amado’s powerful story, illustrated with striking poignancy by Abraham Urias, brings to light the dire circumstances of so many children, so close to home.

Friendship -- to be known, to be accepted as you are, to feel safe, especially when you are vulnerable. The girl in this story has recently arrived in... [Read More]

Friendship -- to be known, to be accepted as you are, to feel safe, especially when you are vulnerable. The girl in this story has recently arrived in Brooklyn with her family. On her very first day at school she meets a girl who almost instantly becomes her very best friend. She feels known, loved and accepted by her. But when she invites her friend to come for dinner with her family -- a family that feels free to eat weird food and, even worse, burst into song with their version of a sentimental classic of longing and homesickness -- something shifts and she no longer feels safe at all. What will it be like tomorrow at school? Award-winning illustrator Alfonso Ruano's art beautifully depicts the depth of feeling that the friends experience in this story from acclaimed author and translator Elisa Amado, about how difficult it is to come from somewhere else and what a difference friendship can make. 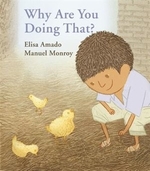 WHY ARE YOU DOING THAT
By: elisa amado | Published: June 2014

Chepito is full of questions. Why is his mother cooking eggs and frying beans? Why is Manuel digging around the corn? Why is Ramón milking the ... [Read More]

Chepito is full of questions. Why is his mother cooking eggs and frying beans? Why is Manuel digging around the corn? Why is Ramón milking the cow? Why is Maria slapping dough between her hands? In this simply told story, a little boy learns all about food and where it comes from. Following on the success of What Are You Doing? Elisa Amado and Manuel Monroy have created another gem of a picture book, this time about food - where it comes from, how we nurture food plants and animals, and what we eat to be healthy and strong. Manuel Monroy sweetly depicts Chepito's world - a rural community where people grow much of their own food and raise chickens and cows - giving young children a clear picture of the origins of foods they consume every day. Includes a short glossary.