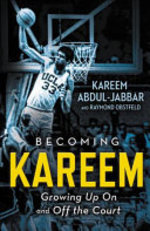 In his first memoir written especially for young readers, Kareem Abdul-Jabbar will focus on his relationships with several important coaches in his... [Read More]

In his first memoir written especially for young readers, Kareem Abdul-Jabbar will focus on his relationships with several important coaches in his life - including his father, his high-school coach and Coach Wooden - as he tells the story of his life and career. Like many kids in elementary school, Kareem (then Lew Alcindor) struggled with fitting in, pleasing a strict father, and severe shyness that made him socially awkward. Unlike most kids, he also had to grapple with a sudden growth spurt that shot him up taller than pretty much everyone around him, including students, teachers, and even his own father. His increasing fame as a basketball player throughout high school brought new challenges as this shy boy was shoved into the national spotlight. At the same time, social unrest in the country, particularly involving the growing civil rights movement, tugged at his conscience as he tried to find his place in it. After all, he was just a kid. What could he do? Recruited to UCLA, his fame as an unstoppable center made him a college superstar. But as his fame rose, so did the social turmoil in the country: Vietnam War protests, Malcolm X and the Nation of Islam, Dr. Martin Luther King, Jr., large-scale riots, the Women's Movement. He could have hidden from all the turmoil as a sports celebrity, but he chose to join in the social evolution. The result was converting to Islam and changing his name to Kareem Abdul-Jabbar. The public backlash was blistering, but he didn't waver. 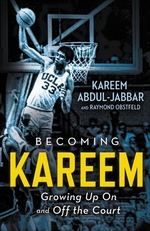 ANEW YORK TIMESBESTSELLER! The first memoir for young readers by sports legend Kareem Abdul-Jabbar. At one time, Lew Alcindor was just another kid from New York City with all the usual problems: He struggled with fitting in, with pleasing a strict father, and with overcoming shyness that made him feel socially awkward. But with a talent for basketball, and an unmatched team of supporters, Lew Alcindor was able to transform and to become Kareem Abdul-Jabbar. From a childhood made difficult by racism and prejudice to a record-smashing career on the basketball court as an adult, Kareem Abdul-Jabbar's life was packed with "coaches" who taught him right from wrong and led him on the path to greatness. His parents, coaches Jack Donahue and John Wooden, Muhammad Ali, Bruce Lee, and many others played important roles in Abdul-Jabbar's life and sparked him to become an activist for social change and advancement. The inspiration from those around him, and his drive to find his own path in life, are highlighted in this personal and awe-inspiring journey. Written especially for young readers, Becoming Kareem chronicles how Kareem Abdul-Jabbar become the icon and legend he is today, both on and off the court. 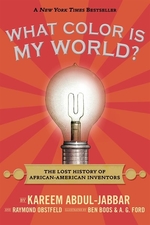 WHAT COLOR IS MY WORLD
By: kareem abdul-jabbar | Published: December 2013

“Get ready to have your mind blown with this fun book.” — The Washington Post Kareem Abdul-Jabbar, basketball legend and the... [Read More]

“Get ready to have your mind blown with this fun book.” — The Washington Post Kareem Abdul-Jabbar, basketball legend and the NBA’s all-time leading scorer, champions a lineup of little-known African-American inventors in this lively, kid-friendly book. Offering profiles with fast facts and framed by a funny contemporary story featuring two feisty twins, here is a tribute to black inventors whose ingenuity and perseverance against great odds made our world safer, better, and brighter. Back matter includes an authors’ note and sources.