Your search returned 77 results in the Theme: prejudice & racism.

Susan B. Anthony and Frederick Douglass dicuss their efforts to win rights for women and African Americans. Some people had rights, while others had ... [Read More]

Susan B. Anthony and Frederick Douglass dicuss their efforts to win rights for women and African Americans. Some people had rights, while others had none. Why shouldn't they have them, too? Two friends, Susan B. Anthony and Frederick Douglass, get together for tea and conversation. They recount their similar stories fighting to win rights for women and African Americans. The premise of this particular exchange between the two is based on a statue in their hometown of Rochester, New York, which shows the two friends having tea. The text by award-winning writer Dean Robbins teaches about the fight for women's and African Americans' rights in an accessible, engaging manner for young children. Two Friends is beautifully illustrated by Selina Alko and Sean Qualls, the husband-and-wife team whose The Case for Loving received three starred reviews! Two Friends includes back matter with photos of Susan B. Anthony and Frederick Douglass.

A humorous tale about acceptance, social justice and keeping an open mind. Though he’s scared at first, a boy who encounters an alligator in the... [Read More]

A humorous tale about acceptance, social justice and keeping an open mind. Though he’s scared at first, a boy who encounters an alligator in the woods discovers all the creature wants is companionship — and leftovers! — and the two become friends. But the mayor of the boy’s town won’t have it. He makes a proclamation, “NO ALLIGATORS! Blah, blah, blah.” Which the townspeople agree with, at first. Then they realize how friendly the alligator is (and how nice it is to have someone eat their leftovers!), and they want him to stay. Can they all come together and find a way to keep the alligator in their town? See you later, alligator? Not if these townspeople can help it!

AFTER THE SHOT DROPS
By: randy ribay | Published: March 2018

A powerful novel about friendship, basketball, and one teen's mission to create a better life for his family. Written in the tradition of Jason Reynol... [Read More]

A powerful novel about friendship, basketball, and one teen's mission to create a better life for his family. Written in the tradition of Jason Reynolds, Matt de la Pe�a, and Walter Dean Myers, After the Shot Drops now has 3 starred reviews! * "Belongs on the shelf alongside contemporary heavy-hitters like Angie Thomas's The Hate U Give, Brendan Kiely and Jason Reynolds's All-American Boys, and Nic Stone's Dear Martin."--School Library Journal, starred review Bunny and Nasir have been best friends forever, but when Bunny accepts an athletic scholarship across town, Nasir feels betrayed. While Bunny tries to fit in with his new, privileged peers, Nasir spends more time with his cousin, Wallace, who is being evicted. Nasir can't help but wonder why the neighborhood is falling over itself to help Bunny when Wallace is in trouble. When Wallace makes a bet against Bunny, Nasir is faced with an impossible decision--maybe a dangerous one. Told from alternating perspectives, After the Shot Drops is a heart-pounding story about the responsibilities of great talent and the importance of compassion. 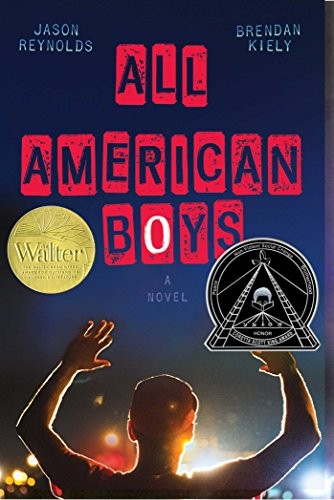 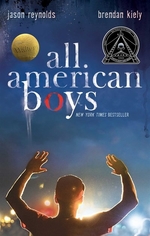 A 2016 Coretta Scott King Author Honor book, and recipient of the Walter Dean Myers Award for Outstanding Children’s Literature. In this New York Times bestselling novel, two teens—one black, one white—grapple with the repercussions of a single violent act that leaves their school, their community, and, ultimately, the country bitterly divided by racial tension. A bag of chips. That’s all sixteen-year-old Rashad is looking for at the corner bodega. What he finds instead is a fist-happy cop, Paul Galluzzo, who mistakes Rashad for a shoplifter, mistakes Rashad’s pleadings that he’s stolen nothing for belligerence, mistakes Rashad’s resistance to leave the bodega as resisting arrest, mistakes Rashad’s every flinch at every punch the cop throws as further resistance and refusal to STAY STILL as ordered. But how can you stay still when someone is pounding your face into the concrete pavement? There were witnesses: Quinn Collins—a varsity basketball player and Rashad’s classmate who has been raised by Paul since his own father died in Afghanistan—and a video camera. Soon the beating is all over the news and Paul is getting threatened with accusations of prejudice and racial brutality. Quinn refuses to believe that the man who has basically been his savior could possibly be guilty. But then Rashad is absent. And absent again. And again. And the basketball team—half of whom are Rashad’s best friends—start to take sides. As does the school. And the town. Simmering tensions threaten to explode as Rashad and Quinn are forced to face decisions and consequences they had never considered before. Written in tandem by two award-winning authors, this four-starred reviewed tour de force shares the alternating perspectives of Rashad and Quinn as the complications from that single violent moment, the type taken directly from today’s headlines, unfold and reverberate to highlight an unwelcome truth. 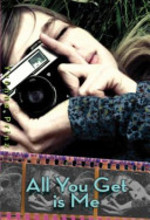 ALL YOU GET IS ME
By: yvonne prinz | Published: December 2010

Sixteen-year-old Roar has been yanked from her city life and,suddenly, she's a farm girl, albeit a reluctant one, sellingfigs at the farmer's market a... [Read More]

Sixteen-year-old Roar has been yanked from her city life and,suddenly, she's a farm girl, albeit a reluctant one, sellingfigs at the farmer's market and developing her photographs in arickety shed. Caught between the lure of a troublemaking friendnamed Storm, falling in love with a brooding, easy-on-the-eyesL.A. boy, and her complicated feelings about her father's humanrights crusade on behalf of undocumented Mexican farm workersthat challenges the fabric of the farm community, Roar is goingto have to tackle it all--even with dirt under her fingernails.

Standing in opposition to a class assignment to debate Hitler's Final Solution, seniors Cade and Logan become embroiled in turmoil involving their teacher, principal, Commissioner of Education, white supremacists, and their entire community.

The Awakening of Malcolm X is a powerful narrative account of the activist's adolescent years in jail, written by his daughter Ilyasah Shabazz along w... [Read More]

The Awakening of Malcolm X is a powerful narrative account of the activist's adolescent years in jail, written by his daughter Ilyasah Shabazz along with 2019 Coretta Scott King-John Steptoe award-winning author, Tiffany D. Jackson. Here is an intimate look at Malcolm X's young adult years. While this book chronologically follows X: A Novel, it can be read as a stand-alone historical novel that invites larger discussions on black power, prison reform, and civil rights. 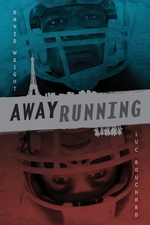 Matt, a white quarterback from Montreal, Quebec, flies to France (without his parents' permission) to play football and escape family pressure. Freeman, a black football player from San Antonio, Texas, is in Paris on a school trip when he hears about a team playing American football in a rough, low-income suburb called Villeneuve-La-Grande. Matt and Free join the Diables Rouges and make friends with the other players, who come from many different ethnic groups. Racial tension erupts into riots in Villeneuve when some of their Muslim teammates get in trouble with the police, and Matt and Free have to decide whether to get involved and face the very real risk of arrest and violence. 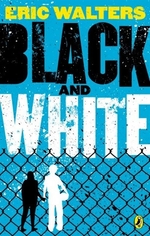 Thomas and Denyse have a lot in common. They both love basketball and sugar on their popcorn, but they have one major difference: Thomas is white and ... [Read More]

Thomas and Denyse have a lot in common. They both love basketball and sugar on their popcorn, but they have one major difference: Thomas is white and Denyse is black. Some people start making racist remarks when they go out, and their parents warn them of the hardships ahead. They can't understand what the big deal is, but will the pressure of this relationship break them apart? 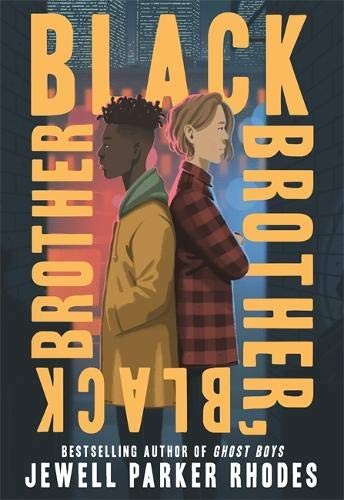 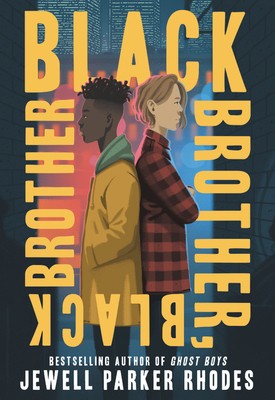 Sometimes, 12-year-old Donte wishes he were invisible. As one of the few black boys at Middlefield Prep, most of the students don't look like him. The... [Read More]

Sometimes, 12-year-old Donte wishes he were invisible. As one of the few black boys at Middlefield Prep, most of the students don't look like him. They don't like him either. Dubbing him "Black Brother," Donte's teachers and classmates make it clear they wish he were more like his lighter-skinned brother, Trey. When he's bullied and framed by the captain of the fencing team, "King" Alan, he's suspended from school and arrested for something he didn't do. Terrified, searching for a place where he belongs, Donte joins a local youth center and meets former Olympic fencer Arden Jones. With Arden's help, he begins training as a competitive fencer, setting his sights on taking down the fencing team captain, no matter what. As Donte hones his fencing skills and grows closer to achieving his goal, he learns the fight for justice is far from over. Now Donte must confront his bullies, racism, and the corrupt systems of power that led to his arrest.

BLACK FRIEND - ON BEING A BETTER WHITE P
By: frederick joseph | Published: December 2020 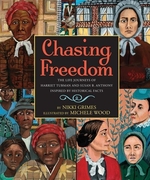 Nikki Grimes offers a glimpse into the inspiring lives of Susan B. Anthony and Harriet Tubman. What if Harriet Tubman and Susan B. Anthony sat down over tea to reminisce about their extraordinary lives? What would they recall of their triumphs and struggles as they fought to achieve civil rights for African Americans and equal rights for women? And what other historical figures played parts in their stories? These questions led Coretta Scott King Award winner Nikki Grimes to create Chasing Freedom, an engaging work of historical fiction about two of the nineteenth century's most powerful, and inspiring, American women. With breathtaking illustrations by Coretta Scott King Award winner Michele Wood, Chasing Freedom richly imagines the experiences of Tubman and Anthony, set against the backdrop of the Underground Railroad, the Civil War, and the Women's Suffrage Movement. Additional back matter invites curious young readers to further explore this period in history - and the larger-than-life figures who lived it.

Stuck in the traditional community of Badfish Creek, Elwyn longs for change. When his uncle offers him the chance to leave his rural roots behind, he ... [Read More]

Stuck in the traditional community of Badfish Creek, Elwyn longs for change. When his uncle offers him the chance to leave his rural roots behind, he jumps at the opportunity, eager to move to Liberty to gain an education and become part of a flourishing world. Finally, life seems to be opening up to him. But it is not long before he understands that all that glitters is not gold: there are things going on in Liberty that Elwyn cannot ignore. Things that profoundly threaten the world he has rejected and things that he has to fight against.