Your search returned 3 results in the Theme: drag queens.

The narrator thinks it's awesome that his Uncle and his Auntie are the same person. Uncle Leo is an accountant. Auntie Lotta is a fabulous performer.... [Read More]

The narrator thinks it's awesome that his Uncle and his Auntie are the same person. Uncle Leo is an accountant. Auntie Lotta is a fabulous performer. One day Lotta's family comes to watch her perform at Pride, where she saves the day by stopping a dog crashing a float. The mayor wants to give her a medal for courage and to celebrate with all her friends, but Lotta worries that her Leo friends won't like her as Lotta. With the help of her nephew they put together a fierce look that is both Leo and Lotta. A sweet, uplifting story about boldly being your true self.

A fierce coming-of-age verse novel about identity and the power of drag, from acclaimed UK poet and performer Dean Atta. Perfect for fans of... [Read More]

A fierce coming-of-age verse novel about identity and the power of drag, from acclaimed UK poet and performer Dean Atta. Perfect for fans of Elizabeth Acevedo, Jason Reynolds, and Kacen Callender. Michael is a mixed-race gay teen growing up in London. All his life, he's navigated what it means to be Greek-Cypriot and Jamaican--but never quite feeling Greek or Black enough. As he gets older, Michael's coming out is only the start of learning who he is and where he fits in. When he discovers the Drag Society, he finally finds where he belongs--and the Black Flamingo is born. Told with raw honesty, insight, and lyricism, this debut explores the layers of identity that make us who we are--and allow us to shine. 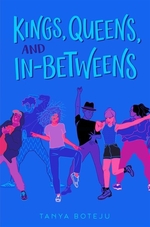 “Poignant and important.” —Refinery29 Judy Blume meets RuPaul’s Drag Race in this funny, feel-good debut novel about a queer teen who navigates questions of identity and self-acceptance while discovering the magical world of drag. Perpetually awkward Nima Kumara-Clark is bored with her insular community of Bridgeton, in love with her straight girlfriend, and trying to move past her mother’s unexpected departure. After a bewildering encounter at a local festival, Nima finds herself suddenly immersed in the drag scene on the other side of town. Macho drag kings, magical queens, new love interests, and surprising allies propel Nima both painfully and hilariously closer to a self she never knew she could be—one that can confidently express and accept love. But she’ll have to learn to accept lost love to get there. From debut author Tanya Boteju comes a poignant, laugh-out-loud tale of acceptance, self-expression, and the colorful worlds that await when we’re brave enough to look.